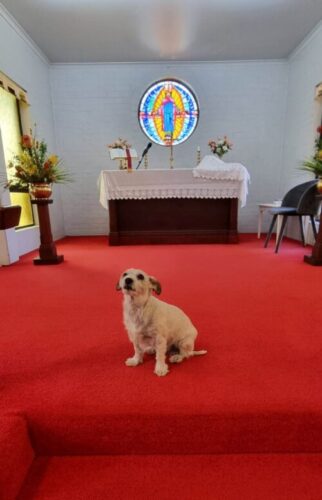 The little dog sits patiently on the chancel steps, waiting upon his owner’s next word. He’s a church dog, a regular, and somewhat of a celebrity in the region – you can find his modelling shots online. “He’s what keeps me sane,” his owner Robbie tells me. “Him and this place.” The place in question is the Good News congregation of Lismore East.

The morning’s journey to the modest orange-brick church that houses the remaining Northern Rivers’ contingent of Lutherans has taken me along the Bruxner Highway through the verdant, rolling landscape of the border zone, on a bright, cloudless Sunday. There was no sign of the flood that had occurred just one week past – nor of the one before that, or the one before that.

But if one were to skip the meandering road that skirts the Lismore basin and follows the ridgeline to the little church nestled quietly in the outer suburbs; and continue instead down, down into the bowl of the town proper, the devastation of 28th February 2022 would soon become evident. Eight months on, many stores remain shuttered or boarded up, and many more houses exist only as memories in the minds of people still waiting to go home. A tune comes on the radio as I drive: Crowded House’s ‘Take the Weather.’ Take it indeed.

Like many small churches in rural areas, Good News Lismore East houses a congregation that comes from all over. Robbie and his sidekick Benji the dog live in a caravan in Byron Bay. Long-term Chair and Elder Glenn Faulkner, and his wife Jan, drive over from Alstonville. And the Becker family from Casino, but they hail originally from Toowoomba, after which they moved onto the family farm at Inglewood in Southern Queensland. There they grew wine and ran sheep and fat lambs. Job opportunities brought them south 15 years ago – Paul in the dairy industry and Chris in a local school. They have raised their family here and have seen their fair share of challenges. Faith gets them through.

“We were members at St John’s Wilsonton when Paul was offered work here. We were in drought at the family farm, and we had to make decisions about the kids’ schooling, so we took the leap and came down,” Chris explains. It was an incredibly tough decision: the farm had been in Chris’s family for 99 years and eight months when they had to sell.

Paul is very active at Good News: running the tech, as part of the preaching team, as a church Elder…and all the other tasks, incidental and great, that encumber a community that doesn’t have a minister. Thirty years ago, there would have been 40 or 50 people filling the pews, as well as other Lutheran faith communities in surrounding towns. Now, those other places of worship have closed and there can be anywhere between three and twenty at Good News on any given Sunday. “Twenty back when there was a pastor, anyway,” Paul clarifies.  He’s quick to point out that he is just one cog in a tight-knit community: “We actually have three lay-readers who rotate from week to week; Glenn has permission to consecrate the Communion and Jan is the Treasurer; Richard Lutze does all the church plant maintenance and is a lay-reader as well.”

The Beckers, at Good News Congregation.

Morning tea with some congregants. 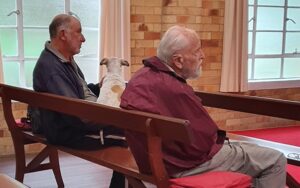 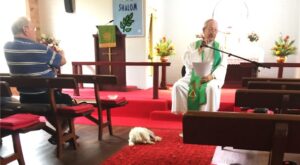 Benji with Pastor Geoff Hartwig and Stuart Farrand, who passed away within a week of each other earlier this year.

Renting out the manse helps keep the community afloat, and resources from Lutheran Media have been invaluable in making Sunday mornings happen. It’s a truism to say “no minister, no ministry” but as Paul points out, people don’t tend to stick around when there’s no-one at the helm. I think about what I’ve seen that morning: he and Glenn steering the rest of us through that time of worship together, in grace and peace…but I take his point.

It was much that way through the February flood as well – the “big one” that destroyed much of a town of 45,000 people. The bowlo across the road was flooded, as were homes a block over, but the little church stayed dry and whole, sparing office space for service providers to set up camp within, and Sunday worship space for Catholics. Down the road at the Alstonville post office, Glenn Faulkner provided the only banking option for miles around – there were no working ATMs left in Lismore, or pretty much anywhere around.

The Beckers are no strangers to floods – surprising considering their drought-affected farming history. There was a flooding creek on the Inglewood property, and a weather station at Woodspring that taught them to monitor conditions. So, Chris grew up knowing how to deal with floods…still, they make her anxious.

“The big one was our third here in the Northern Rivers, with smaller ones between and since. Although we weren’t severely affected personally – other than being cut off from town and damage to our house electricals – it was devastating to witness this one. The military presence, text messages to evacuate, flooding up to the powerlines in Lismore. There was even flooding in Casino, which is usually a litmus test for whether it’s truly serious or not.”

Eight months on, she relives the event every time they cross the bridge into Lismore town. “Those people stuck in their roof cavities, unable to get out…it’s heart-wrenching.” Paul, working as he does in the dairy industry, saw losses of another kind. One young family he assisted had camped on their roof, watching helplessly as their 200 head of Jersey cattle floated away and drowned. Like everyone here, the Beckers did what they could to help.

I reflect as I get in my car and drive away that the little church in Lismore East persists because it is built upon the dogged resilience and enduring witness of the people of the land. A people whose faith knows no seasons, who live to share the goodness of God, and who will attest, with the writer of Ecclesiastes, that – no matter what – the sun also rises.