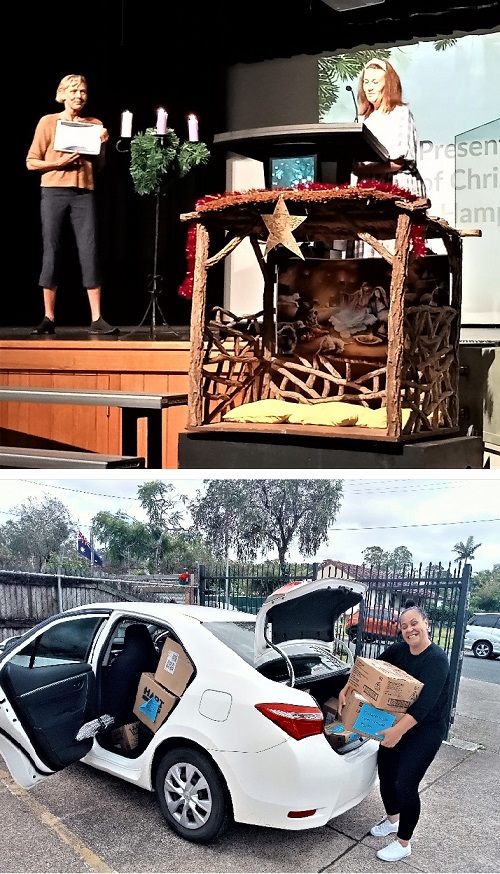 This year, Emmaus College at Jimboomba celebrated its twentieth year.  An ecumenical school of over 1500 students, it was originally brought into being by four Christian faith traditions: Anglican, Catholic, Lutheran and the Uniting Church.

Each year, the school students raise funds for one of these church traditions in turn.  In this year (2022) the school enthusiastically took on board the issue of domestic violence and set about raising funds for Lutheran Services’ Mary and Martha’s Refuge.

Along with this fundraiser, the school students also bring along various items during the last term of school to fill Christmas Hampers which are given to the four participating churches to distribute to wherever they are most needed.  These are packed into waiting vehicles on the final day of school after the Christmas Liturgy.

This year at the Liturgy Susie O’Brien, the representative from Lutheran Services and Mary & Martha’s Women’s Refuge, was presented with a certificate from the school acknowledging that $4,300 had been raised and directed to the rightful bank account.

As Susie acknowledged the funds, she announced that the money would go towards children’s playground equipment at the refuge.  The students were overjoyed to hear that the children would benefit!

Two carloads of assorted foods and Christmas goodies were then sent off to Mary & Martha’s Refuge, courtesy of the generous community at Emmaus College, Jimboomba.