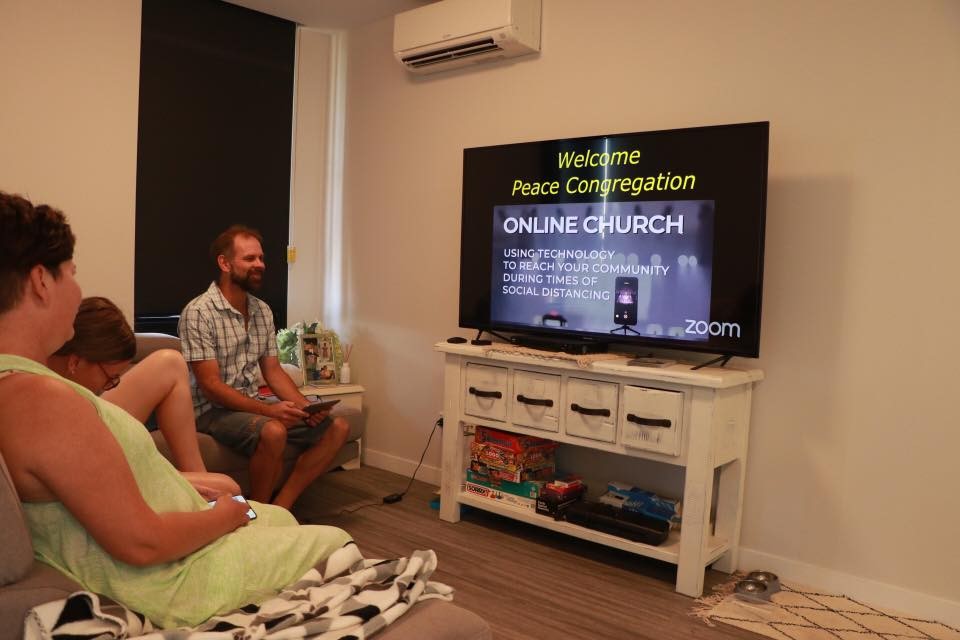 Out of concern for its vulnerable members, Peace Lutheran Congregation in Gatton made an early decision, on Tuesday March 17, to cease all public meetings and services.  In four and half days that week, they set up a Zoom videoconferencing account, tested it in various small groups and councils and progressively trained members how to use it, ready for their first online Sunday worship service on March 22. Some of their story follows. You can view a recording of the service at https://www.peacelutherangatton.info/

‘It started with our Prayer Group. We took it online on Thursday night using Zoom meetings.  We used the Zoom chat function for people to log prayer requests, Bible verses and general small group interactions.  We had ten people join our Prayer Group Online, which was more than usual.

We needed to get all our leadership up-to-speed with our church response to COVID19 and our mission to the young, elderly and people with a disability.  We invited all committee members to join a Zoom meeting to listen, ask questions, and to get to know each other better.  Each of these was now also ready for Sunday.

Saturday involved a dress rehearsal for our first online service with many technical bugs ironed out and a service format generated to better suit the technology and our basic needs.  It is fair to say that this rehearsal took longer than expected as we learned a few differences about online church. But we felt we were ready.

Sunday started with a “Get To Know Zoom” meeting from 8 to 8:30am for people to log in and play with Zoom for the first time. Again, about a dozen people took the opportunity to log in and practise connecting their device to both Zoom and their home theatre systems.  We had a technician available to walk them through any teething problems.

Our Sunday Service was conducted using a Zoom Webinar to allow us to manage involvement from several presenters and minimise interruptions from attendees.  The webinar started before 9am with a home screen and some piano music just like a normal Sunday (a few problems with bandwidth between us and our church pianist).  Church started at 9am just as a normal Sunday with the music stopping as the pastor entered the church.  Everyone could see Pastor Rob in church, just like a normal Sunday, except he was on his own.  Well he wasn’t really on his own.  We had some Teddy Bears that appeared through the service to provide something different for the kids.  Feedback since suggests that some of our grown-up kids laughed more than most!

All this was broadcast to 23 locations via the various Zoom Apps (applications) on windows, Mac, iPhone, iPad, and Andoid phone and tablet.  We had a wide range of devices all join relatively seamlessly.  We also used Zoom to stream to Facebook Live. We had 26 locations join via streaming to our Facebook page including some of our previous members who had returned to their homes overseas. One of our members dialed in via telephone.’

As usual, announcements followed the official church service. Then participants boiled their own kettles and continued to chat over a modified communal morning tea, which included introductions to pets and a garden tour.

How are LCAQD churches connecting during COVID-19? »