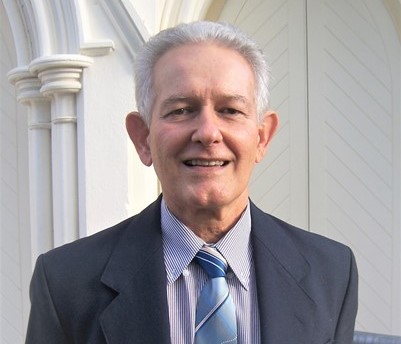 “Keep on doing the things that you have learned and received and heard and seen in me, and the God of peace will be with you.”
Philippians 4:9

John was a courageous, faithful, wise and gentle pastor of the Church. During May 2018, he was diagnosed with small cell non-Hodgkin lymphoma. After chemotherapy, with a weakened immune system, he succumbed to serious infections and passed away peacefully at the Palliative Care Unit at the Prince Charles Hospital on the morning of the 9th of October 2019.

What is the legacy that John leaves with us, that is for consideration of the people of the communities of the Queensland District?

Firstly, John taught us that the Lord of the Church works through everyday folk – like John Vitale. From his own sick bed, John said to me, “I don’t want my funeral to be all about me. It is about the Lord I have served.”

Secondly, John taught us that we have received an extraordinary tradition of Christian Schooling that can be constantly developed and improved. John arrived in Queensland in 1982 to be part of the flourishing ministry of Schools in this District. He worked hard to ensure that we were clear as to why we were serving Queenslanders in the ministry of Lutheran Schooling.

Thirdly, John reminded us that we are not a sect, but that the Lutheran Church is a participant in the mission of God in an ecumenical setting. John was the first president of the newly established Queensland Churches Together and was the preacher for the joint Lutheran Roman Catholic signing of the Joint Declaration on Justification.

Fourthly, John reminded us that we Lutherans are dispersed across different regions in Queensland with diverse needs. John’s Lutheran heritage was directly through the Finns. His mother was a Finn and John was fluent in Finnish, serving the Finns throughout his ministry. He was also actively engaged with the Hopevale Community and joined George Rosendale in the 1998 Synod in Cairns for a Rite of Reconciliation.

Fifthly, John highlighted the truth that we Lutherans have a strong theological tradition and we need to work out the meaning of that tradition in our witness and service in our contemporary culture. From his work on the Commission on Theology and Interchurch Relations and afterwards, John was a known purposeful advocate for the Church’s consideration of the matter of ordaining both women and men in our Church.

Finally, John upheld our heritage that we ordain pastors for the office of the Public Ministry. John did not seek to modify the office he was given, but purposefully refined it. He did not “lord it over” lay people, but saw the gift of different ministries for the work of the Gospel. In his own pastoral work, John was received as a gentle gentleman pastor of the Church.

We thank God for all that we have received from John in his life and service amongst us. We ask the Lord of the Resurrection to comfort Pastor John’s wife Judy, their children Philip, Paul, Andrew and Rebecca and their families, and for all who grieve for John.

Looking ahead, realising what is present … »