There were seven young people enrolled in the year-long confirmation class at St Mark’s Lutheran Church Dalby in Queensland’s Western Downs region when it began in mid-2021.

The congregation’s confirmation team of five members ranging in age from 24 to 80 had decided to use Grow Ministries’ Grow Disciples material for the course. The team allocated a mostly unused choir loft to the confirmation class, furnishing the area with beanbags, ottomans and couch cushions, and encouraging the young people to make it their space. Instead of a whiteboard, the confirmees could use window chalk pens on the windows upstairs. 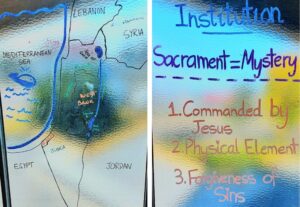 Instead of a whiteboard, the confirmees could use window chalk pens on the windows upstairs.

After a short course of first communion study, the young people were admitted to the sacrament of the altar. The next week, one of the confirmees brought his friend Ben along to worship. Ben sat in on the confirmation class. He came back every week after that and, after a few months, shared that he believed in what we were teaching and would like to be confirmed with the class.

We spoke with Ben about baptism and holy communion and decided that it would all happen for him on the day of confirmation. 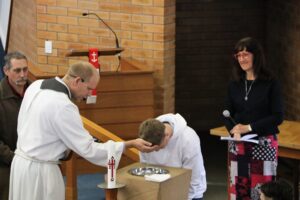 So, on Pentecost Sunday this year, Ben was baptised and then the eight young people were confirmed. Queensland District Bishop Mark Vainikka shared a pre-recorded greeting, including a special message for Ben. This was a special moment for each of the confirmees.

The window chalk is still there, and we are finding it hard to want to clean it off. The young people enjoyed the course so much they have asked whether they could keep meeting after it finished and they almost all attend our fortnightly youth group.

Sadly, the eldest member of the team could not be there on confirmation day but hearing the young people’s collective disappointment that an 80-year-old man could not attend, reinforced the importance of intergenerational ministry. He is much respected by all of them.

Other highlights of the course were sharing in the highs and lows of the teenagers’ weeks and watching them grow in their faith and discipleship. We are very thankful for the Grow Disciples material and will use it again in the future.