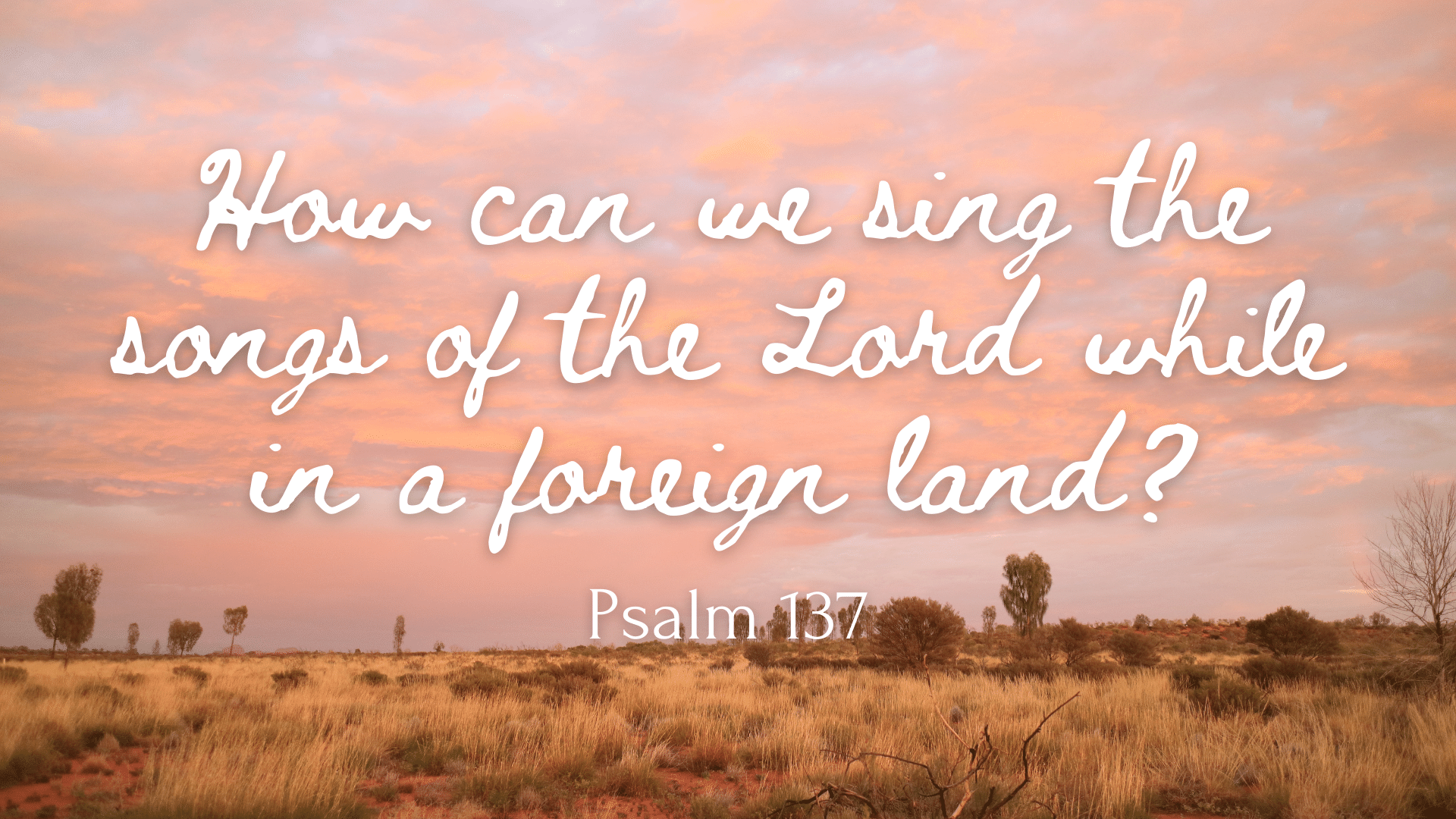 Psalm 137 is an intriguing, enlightening and challenging Scripture passage. Its words have been popularised in our times in the Rastafari song by The Melodians and later especially by Boney M’s cover version in 1978, Rivers of Babylon. Most of us remember the song’s words and the tune off by heart: ‘By the rivers of Babylon, there we sat down, yeah, we wept, when we remembered Zion.’

The Psalm like the song is full of deep lament and touches a wide spectrum of human emotions. Verse four is especially profound: ‘How shall we sing the Lord’s song in a foreign land?’ These are words every immigrant has had to ask. How do we learn to sing the song that is so familiar, indeed the Lord’s song, in a foreign land? Boney M’s version came out in 1978, the year our family moved to Australia from Finland. We heard the song playing everywhere and it became the ever-present backdrop to the many readjustments we had to make as we forged a new life in a foreign land.

The Psalm captures powerfully the feelings of a nation in exile and culminates in words that we find difficult to read, as the frustration and anger of God’s people overflows. God’s people had been exiled under Nebuchadnezzar into Babylon. Up to that point, all worship had centred around the temple in Jerusalem. The temple was synonymous with God’s presence. To worship God anywhere else was unthinkable. At the time of their exile, however, the temple laid smouldering in ruins and God’s people were under the yoke of a foreign ruler in a foreign land.

Scholars point out that the lament in verse four focuses on the Levitical choirs and orchestras. In Babylon, their calling and skills had become redundant and their special place in their community had become obsolete. The people’s sadness in the Psalm is almost palpable. Yet, I see hope in verse four: ‘How shall we sing the Lord’s song in a foreign land?’ The Lord’s song remains. It is still in people’s hearts and on their lips. While the land is foreign, the Lord’s song is pregnant with familiarity. It is sweet on their lips and it rejuvenates their hearts.

The word ‘how’ portrays a desire to learn. It’s an incarnational word. It asks how the saving message of the Lord’s song might be sung in a way that even their captors and enslavers would taste its sweetness. Out of the desperation of God’s people in Babylon, new life began to slowly emerge. The Jewish nation did indeed learn to sing the Lord’s song in a foreign land. Scholars point out that the Babylonian exile is likely the setting when synagogue worship began to emerge. People met in homes or small buildings for mutual exhortation, prayer and reciting of Scripture. This was a momentous change in the life and times of God’s people.

There are many links and synergies with this narrative for us. The church’s place in Australia is vastly different to what it was even two decades ago. It feels like a foreign land to many and hence, we also need to learn to sing the Lord’s song in a new way. This is the challenge before us as Lutherans in Queensland. What is the Holy Spirit saying to us as a church? In order to answer this question, however, we need to first grieve what has been lost. The place of the church in Australian society has changed forever. Like God’s people by the rivers of Babylon, we need to allow ourselves to grieve our losses.

But like God’s people by the rivers of Babylon, we are also called to lift our gaze and our voices and ask: ‘How shall we sing the Lord’s song in a foreign land?’ (Ps.137:4). You will hear me talk, write and preach about Psalm 137 and especially verse four this synodical period leading up to District Convention of Synod in June 2022. Our foundational narrative as a church is one of immigration, adjustment and growth. Our foundational narrative is about learning to sing the Lord’s song in a foreign land. By God’s grace we have done it once. By God’s grace, we can do it again.