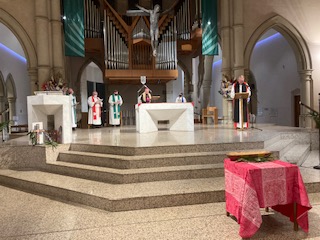 Each September, many Christian churches around the world celebrate the Season of Creation.  This a time to thank and praise God for the bountiful creation that has been provided to support our earthly lives, and also to remember that all Christians, and indeed all people, are called to be faithful stewards of God’s good creation so that the earth can continue to sustain all people into the future.

The international theme for 2021 is “A home for all? Renewing the Oikos of God”. Oikos is a Greek word meaning the family household, and it gives us English words ecology, economy, and ecumenical.  The theme reminds us that earth is a home for all creatures, that the global economy must consider living sustainably, and that all Christians are joined in God’s mission to care for the world and for each other.

For 2021, Queensland’s ecumenical peak body, Queensland Churches Together (QCT), organised an ecumenical opening service for the Season of Creation on 1st September at St Stephen’s Roman Catholic Cathedral, Brisbane, which was attended by representatives of Catholic, Anglican, Uniting and Lutheran churches, with LCAQD represented by Bishop Mark Vainikka. The service included a smoking ceremony provided by Murri Ministry to symbolise healing between us and creation, as well as healing between each other, and Abp Mark Coleridge gave the message. He considered the unique contribution that Christians can bring to solving the current ecological crisis, emphasising that the crisis is primarily a spiritual crisis.  Christians need to embrace a contemplative ecology which involves new ways of listening to and looking at creation around us.  QCT are also curating a Season of Creation photo display throughout September at St John’s Anglican cathedral in Brisbane.

There are lots of ways that congregations can include this season in their congregational life.  It may be through seasonal worship services, emphasising creation in prayers, choosing some worship hymns and songs that praise God as creator, by looking at how their congregation can operate more sustainably, by screening some creation-care films, or (if really brave) organising a blessing of the animals service.  To investigate further, you can see global events and access resources at seasonofcreation.org.